12 schools created a sea of colour on Hastings seafront on the 16th June, celebrating Hastings children.

700 children walked from the Marina and The Stade to the sound of samba bands, meeting on Hastings Pier to celebrate. Guestling Bradshaw who won the School Songwriting Competition performed, as did Hastings Academy bands, which enthralled at Hastings Song Competition in March. And young people from St Leonards Academy talked about overcoming barriers and their achievements.

Each school had their own unique and special flavour. Radiator Arts ran continuing professional development classes for teachers and worked closely with classes, passing on valuable skills.

Liz Miles, the then Trustee of Hastings Thrives and Principle of Silverdale Primary School: “I can’t tell you how excited the children are. Their creations are amazing. They have shown enormous capacity to work together and come together to achieve something special.

The work colourful Parade props were used as part of a Sky Garden Installation at The Stade Hall the following week. 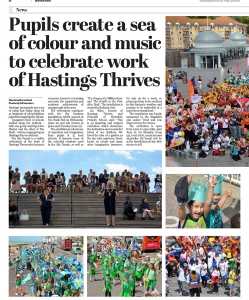 One Stop Carriers for Causes